THE REGION FULL OF HIDDEN GEMS

SKI ČERTOVICA
/Ski In - Ski Out/

The resort’s location directly on the ridge of one of our highest mountains guarantees the most abundant snow. The surrounding area offers several ski resorts.
For those looking for truly alpine skiing, the resort Jasná, Chopok Juh, 25 km away from the cottage, is easily accessible. Winter hiking with snowshoes or alpine skis also has its charm. Popular destinations in the area are the Čertova svadba (1,463m amsl), Lajštroch (1,602m amsl), Beňuška (1,542m amsl) and the Končisté hill (1,474m amsl). Cross-country trails in the area with beautiful views have become extremely popular. Up to 15km of groomed cross-country trails are available throughout the season.

Directly below the cottage there is the Ski Čertovica resort, which offers slopes at an altitude of 900-1,145 metres above sea level on the northern slopes of the Čertova svadba hill. There are 12km of slopes and 5 ski lifts. Beginners will find their own slope here, as well as those who are looking for more demanding free ride terrain. You can ski here from mid-December to mid-April. The tracks are groomed and, if necessary, snowed with artificial snow. The capacity of the lifts is up to 3,000 skiers per hour. Snowboarders and ski alpinists will enjoy Čertovica as well. Ski equipment can be rented at the resort’s rental shop. 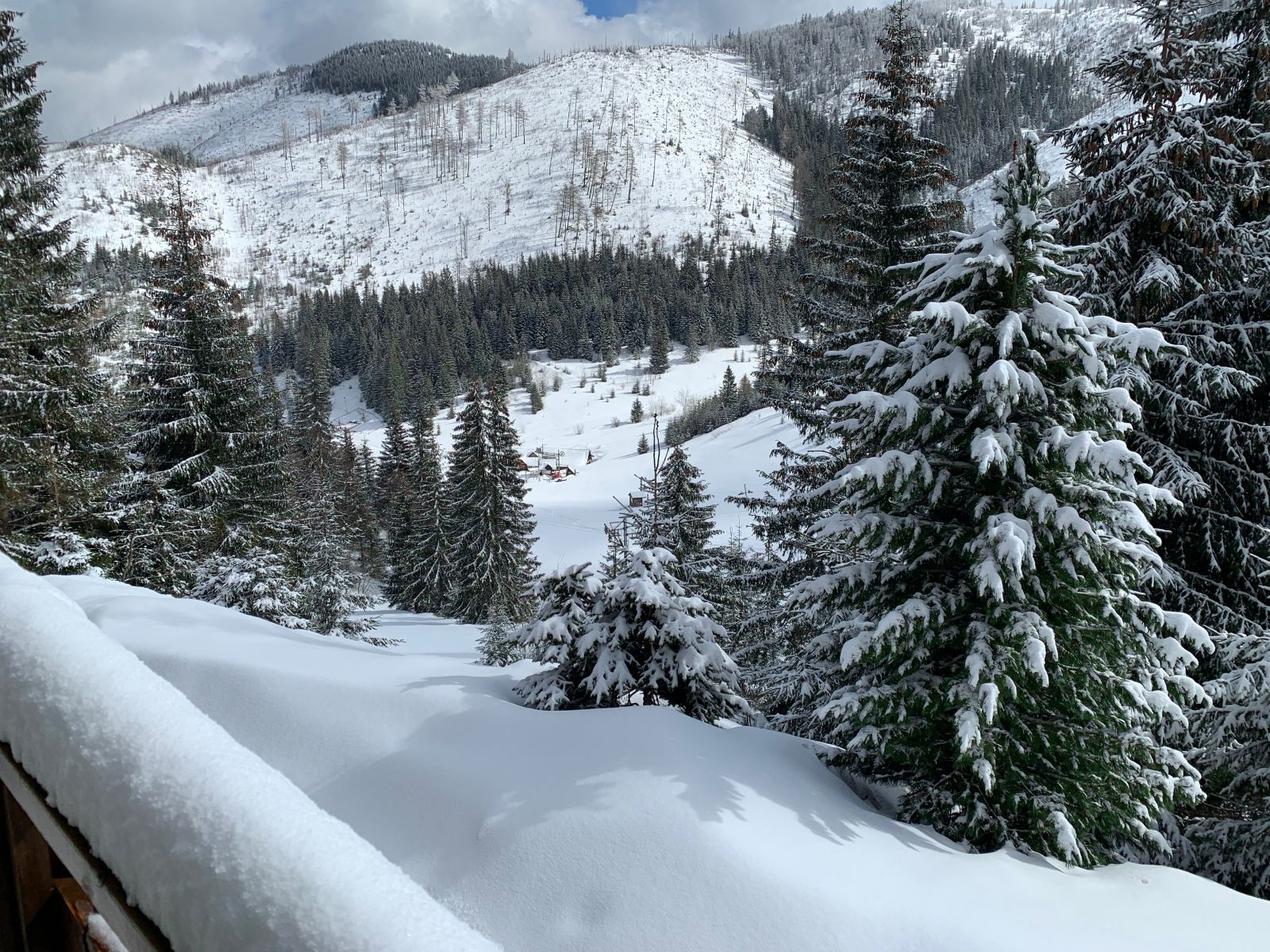 About 200 metres from the cottage there is the second, a bit smaller, resort STIV Čertovica. It is intended for less or intermediate demanding skiers. It offers two lifts and about 1km of groomed slopes along with a free ride zone. The resort is located at an altitude in the range of 1,238 to 1,381 metres, so it does not suffer from the lack of snow. And if there is little snow, an artificial snow system will take care of the snow cover throughout the winter. 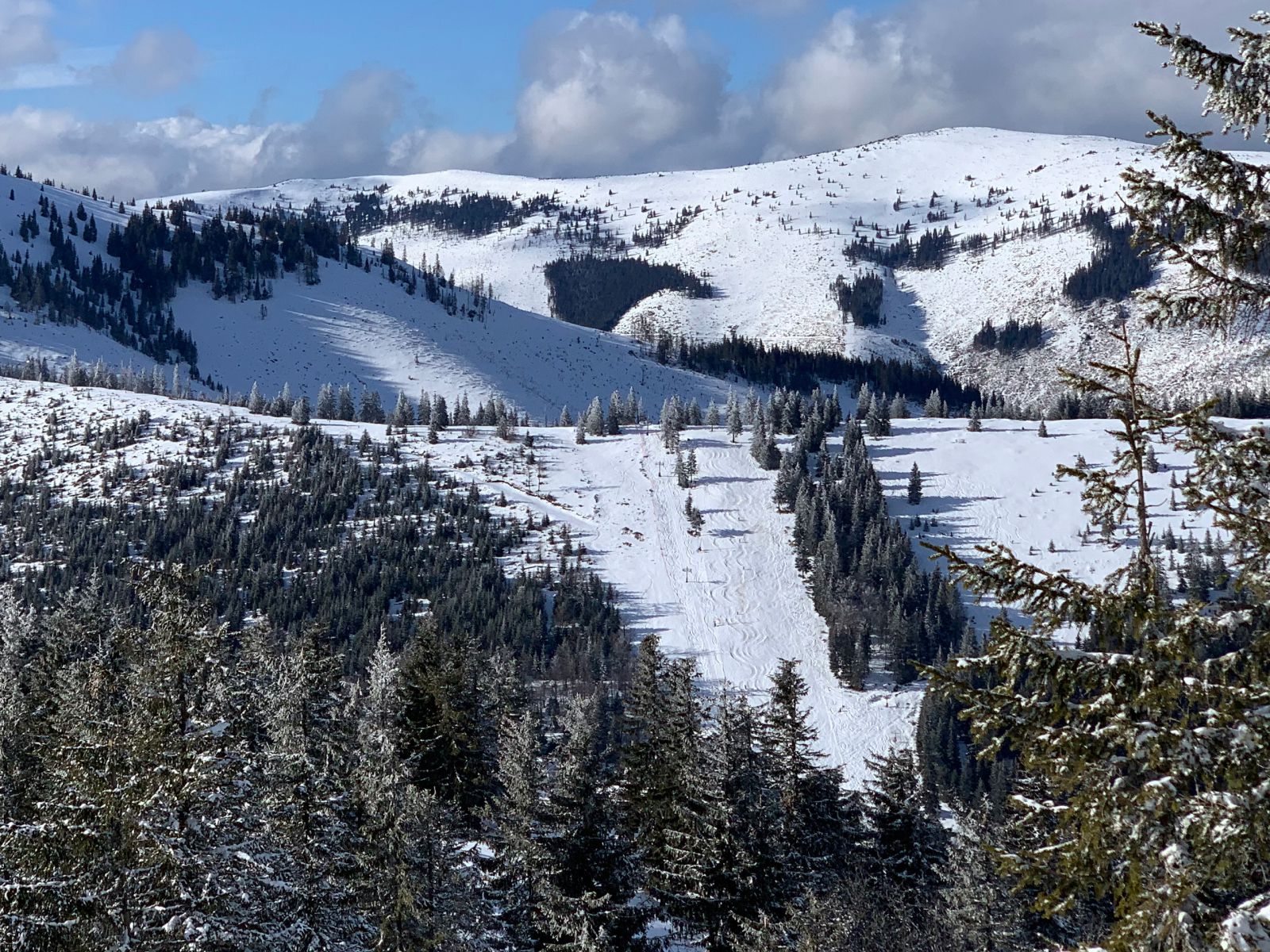 The third available resort near the cottage, only 3km away, is Ski Center Bačova Roveň at an altitude of 1,000-1,360m, located on a hill above the village of Vyšná Boca. There are 3 lifts and 3km of slopes for all categories of skiers. Bačova Roveň also offers night skiing under artificial lighting. The resort has its own ski school and rental.

THE PERFECT BASE FOR LOW TATRA TOURS

The Low Tatras provide a number of options for nature walks. Many hiking trails and especially the ridge of the Low Tatras offer tourists shorter and longer trips on the surrounding hills. Directly along the ridge of the mountain range you can get to the east to Kráľova hoľa and a trip to Ďumbier is a unique experience with beautiful views of the whole of Liptov, Horehronie and the High Tatras. 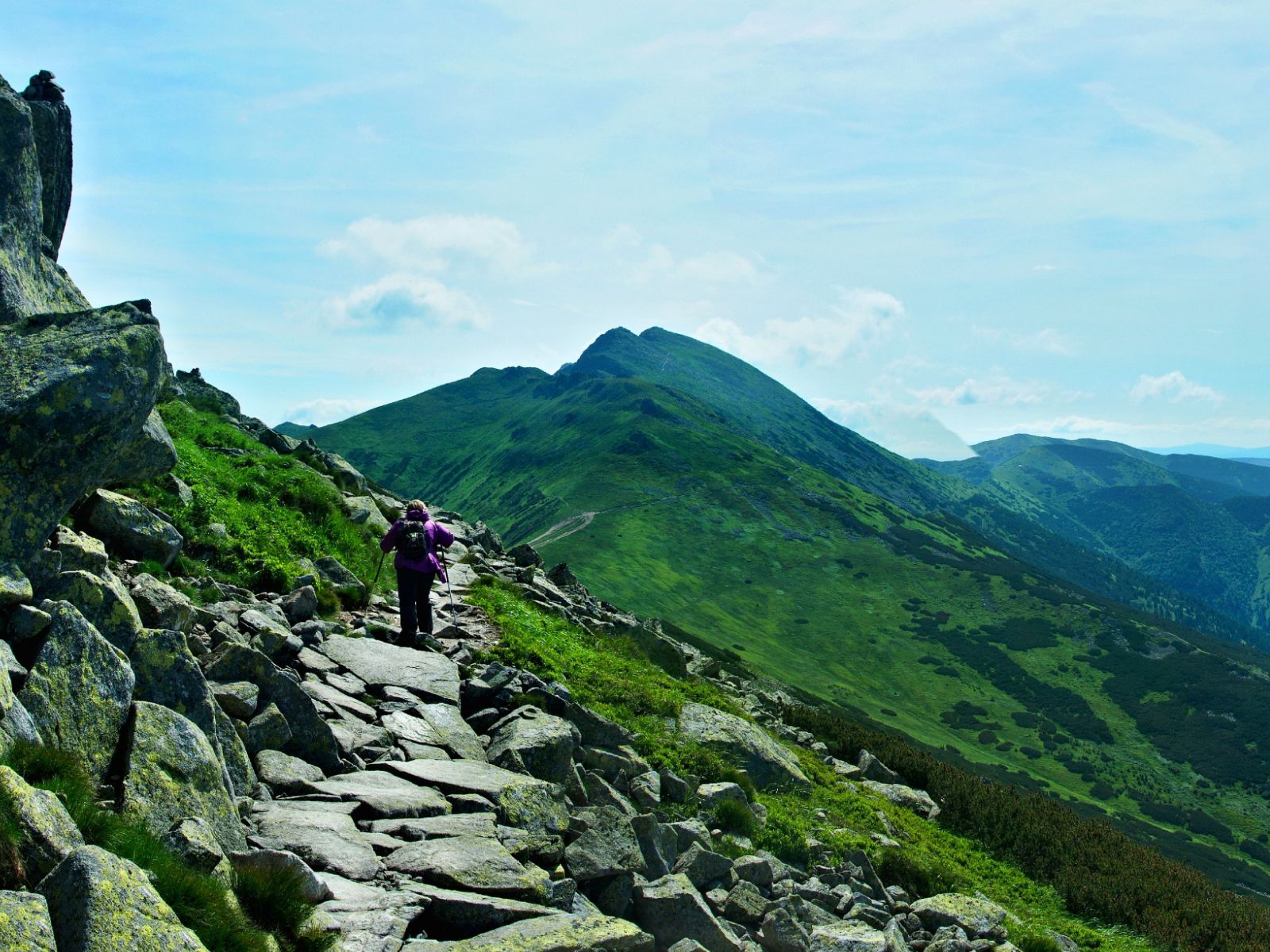 THE PERFECT BASE FOR LOW TATRA TOURS

Worth knowing:
Be sure to watch the weather forecast carefully before heading to the mountains. The weather can be very treacherous, especially for alpine hiking. Always carry the raincoat with you.

Plan your route in advance, check its difficulty and consider your strength. It is not worth overestimating yourself.

From the second half of the summer, the days are getting shorter. You have to get up a bit earlier for hiking. You will avoid the afternoon storms and you will be able to return home by daylight.

When wandering, keep to the marked trails and do not get off them, the mountain service and bears will appreciate it.

Hiking requires adequate equipment. It is based on quality trekking boots.

The sun in the mountains is strong, sunburn is not a problem, use sunscreen.

ALONG THE PATH OF THE HEROES OF THE SNP TO ĎUMBIER

The hiking to Ďumbier is one of the most beautiful hikes in Slovakia. It is also suitable for families with children, but then it is necessary to prepare for a day trip. Approximately 1,000 altitude metres must be overcome. To diversify and possibly facilitate the hike, you can use cable cars or you can take a break at the popular mountain cottage M. R. Štefánik or Kamenná cottage under Chopok.
Read more... 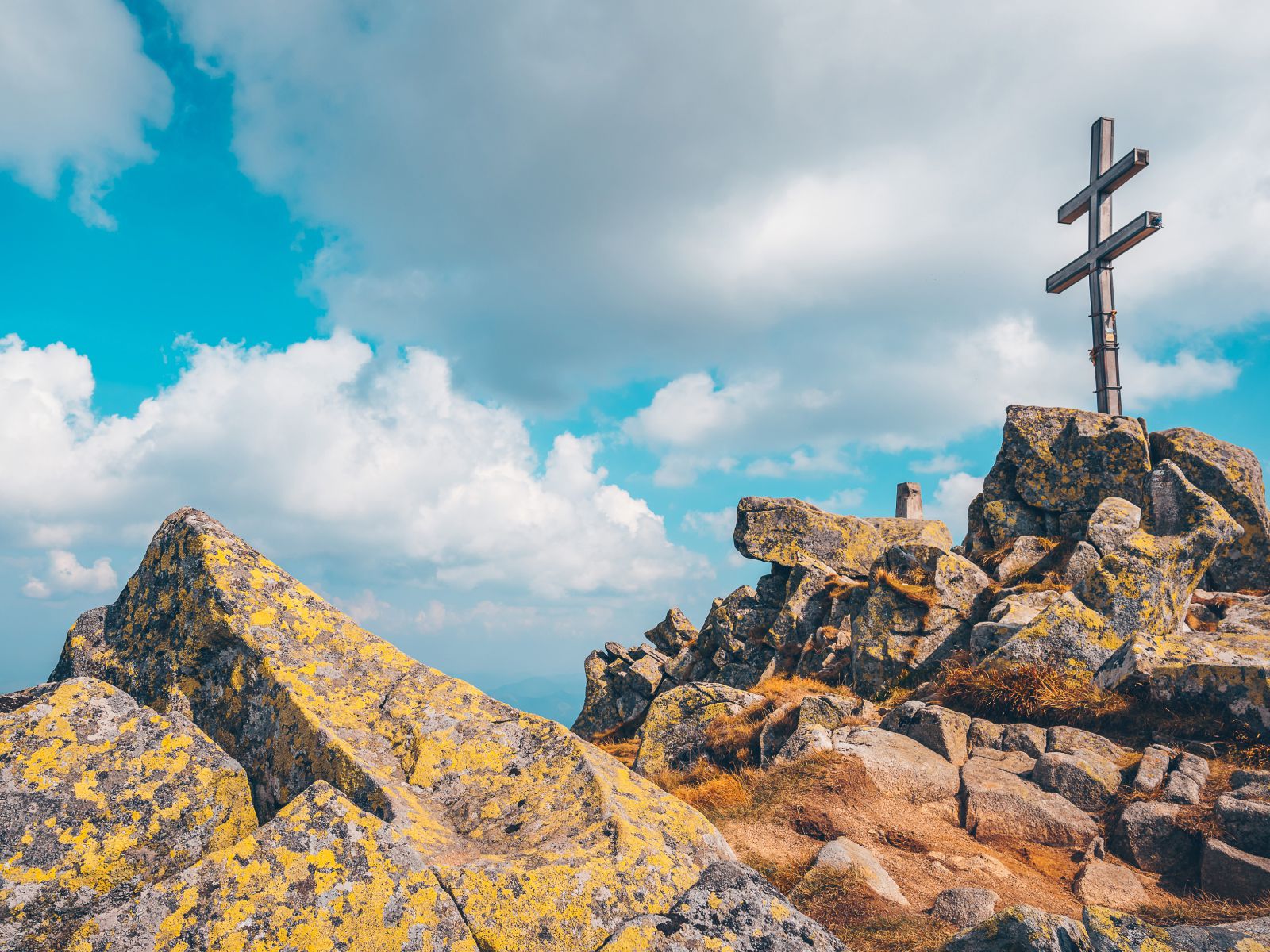 ALONG THE PATH OF THE HEROES OF THE SNP TO ĎUMBIER

You can get to Ďumbier from various places and by several routes. The closest route from the Chata pod sedlom Čertovica is the red-marked trail, which will take you along the Path of the Heroes of the SNP along the main ridge, from the east of the Čertovica saddle around M. R. Štefánik cottage, from the west from the Chopok hill through Ďumbierske saddle. Or you can go along the blue-marked trail from the village of Vyšná Boca via Králička. On the top of Ďumbier is the Ďumbier National Nature Reserve, which is a part of the Low Tatras National Park. The reward for the hike will be a wonderful panoramic view of almost all the mountains of central and northern Slovakia. You will see the Tatras, Chočské hills, Poľana, Veporské hills and Stolické hills. Under favorable conditions, you can see the Orava Beskydy with Pilský and Baba mount, Oravská Magura, Vtáčnik, Krivánska Fatra, Sitno and even the Hungarian Kékes.

EASY HIKE TO THE BEŇUŠKA HILL

The ascent to the Beňuška hill is undemanding and easy. A large part of the route leads through dwarf pines bushes, but at the end you will be rewarded with a view of the surrounding hills. The very top of Beňuška hill is bare. The green-marked trail will lead you from Chata pod sedlom Čertovica to the top. The ascent to Sedlo pod Lenivou is gentle and relatively regular. Soon the wide path turns and continues along the trail from the saddle to the small hill, from which you descend to the second saddle. From there, steeper ascent to the top of Beňuška continues. The route is undemanding, ideal for children and dogs.

Route: Sedlo Čertovica – Sedlo pod Lenivou - Beňuška
Route length: 7km
Total time: 2 hours 15 min.
Altitude: approx. 300m
Difficulty: In the summer it is an easy trip - mostly via the route for bikes. In the winter it is ideal for cross-country skiing, snowshoeing or alpine skiing. 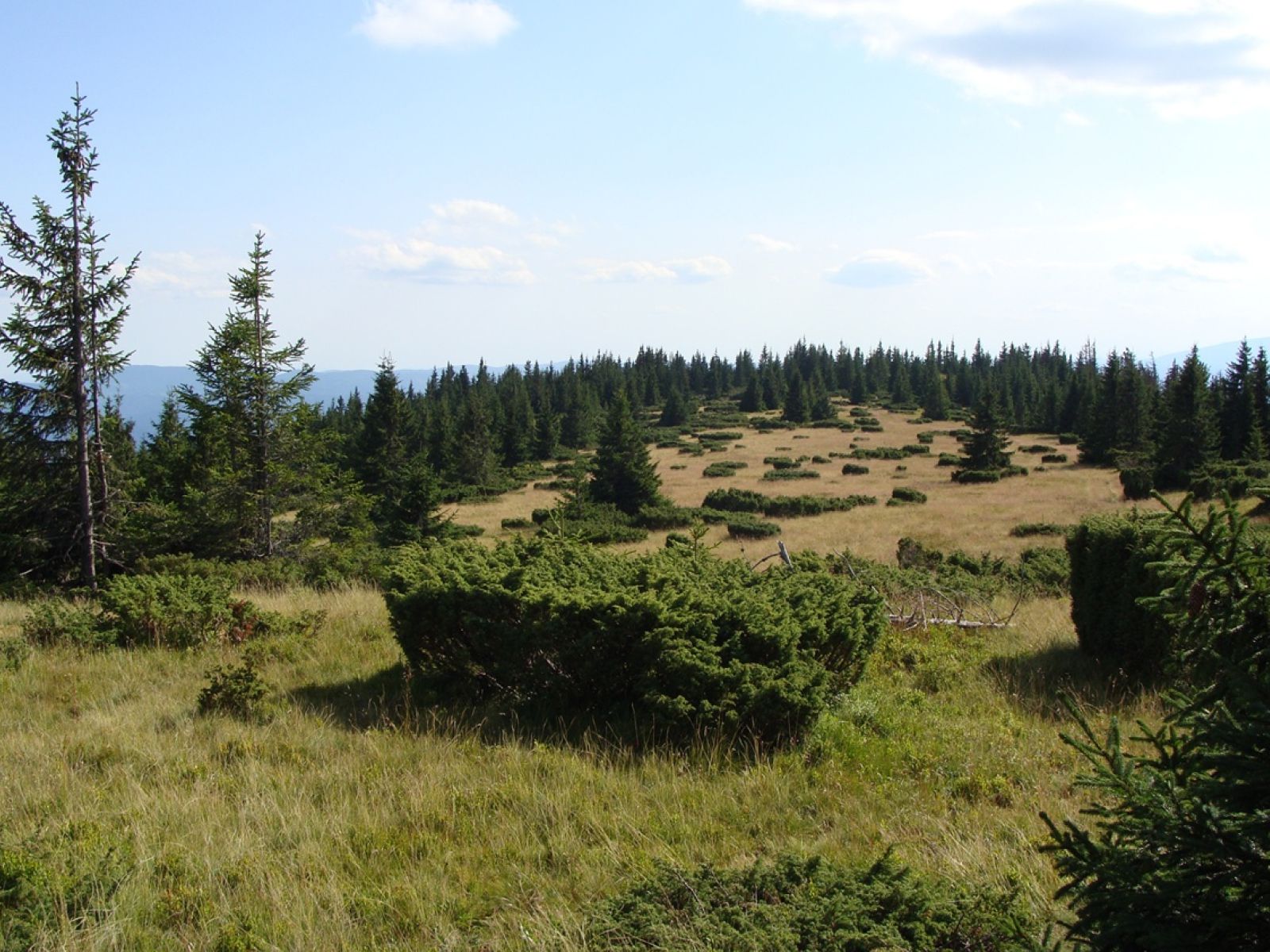 The route leads from Chata pod sedlom Čertovica under Čertova svadba hill, across the saddle behind Leniva hill and the easily accessible Beňuška hill. On the way to Beňuška, you can see part of Horehronie and the ridges of the Low Tatras. After crossing the Lenivá saddle, you get to nice forest, through which you get on the top of the Beňuška hill. The top is vast and almost entirely overgrown with blueberries. The path continues below the peak on the south side across the beautiful mountain meadow Kečka.
Read more ... 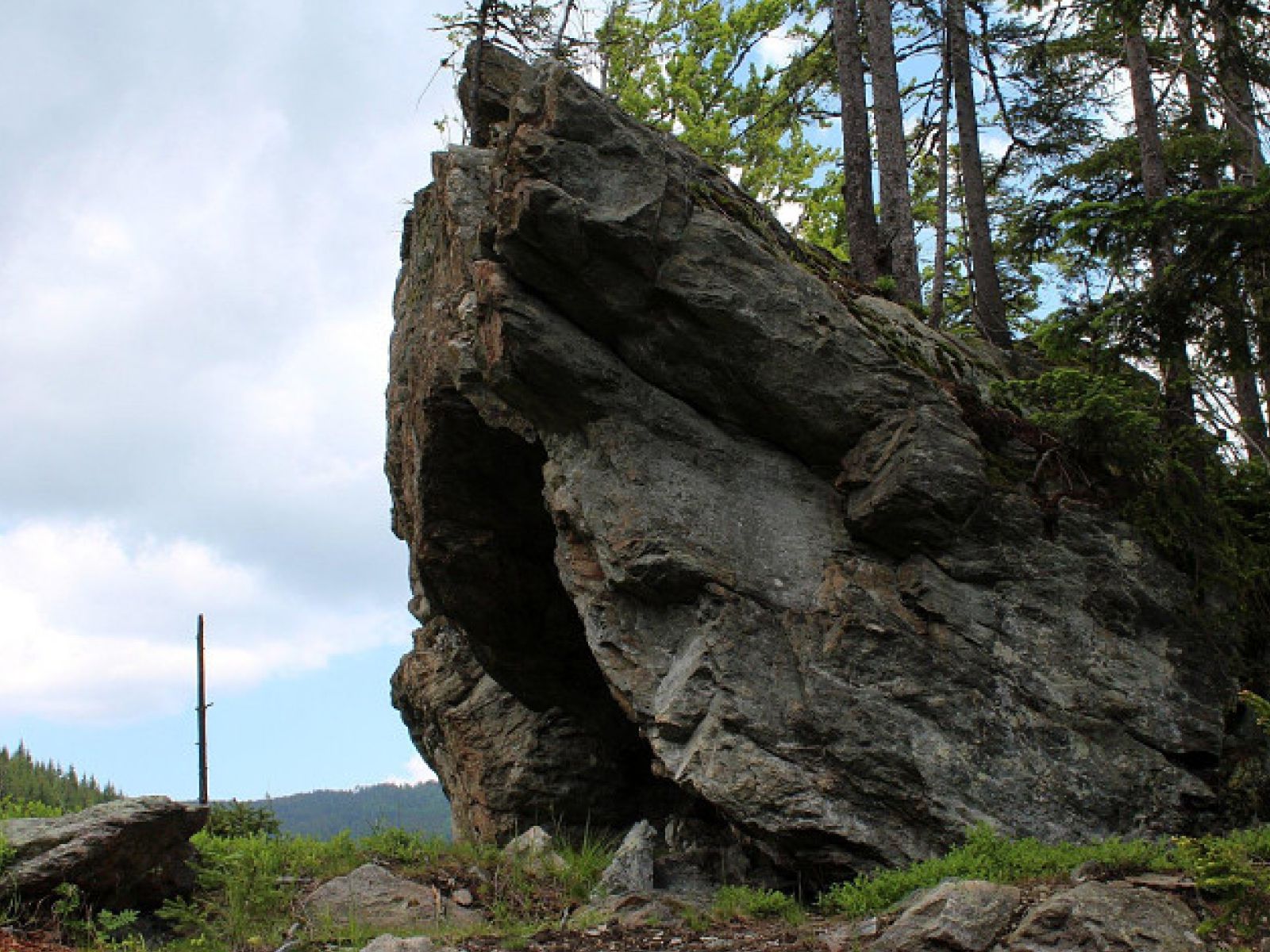 A steeper descent will get you to the edge of the clearing near the wooden tourist shelter Líška at an altitude of 1,415m. From there you will descend steeply to the saddle below Bukovinka, in which you come across a nicely kept well below Bukovinka.
Those with sharp eyes will not miss two red arrows painted on the tree trunk which indicate the direction of the two paths: one leading to the Bukovinská rock (the locals call it Rock over the bunker) and the other to the Bralo Skala. Both places offer wonderful views. You will descend on a moderately steep path through Hlboká to Braväcovo.

You will find the lookout tower after an easy, about half an hour's ascent from the main road in the village of Nižná Boca. The route is well marked. Nižná Boca is approximately 6km away from Chata pod sedlom Čertovica and can be easily reached by car or by walking along the paved road directly from the cottage through the village of Vyšná Boca. The walk takes about 1 hour 20 minutes. The lookout tower together with a mountain hut is on Krajčov hill above the village of Nižná Boca at an altitude of 1,000m. It serves as an observatory for quick identification of fires in the area. Thanks to its height of 14.5 metres and a unique location it offers a beautiful view of the entire village of Nižná Boca and the Bocianska valley. If you are lucky to have a nice weather, you see the famous Kriváň peak.
www.niznaboca.sk/turizmus/aktivity/rozhladna-na-krajcovom-vrchu/ 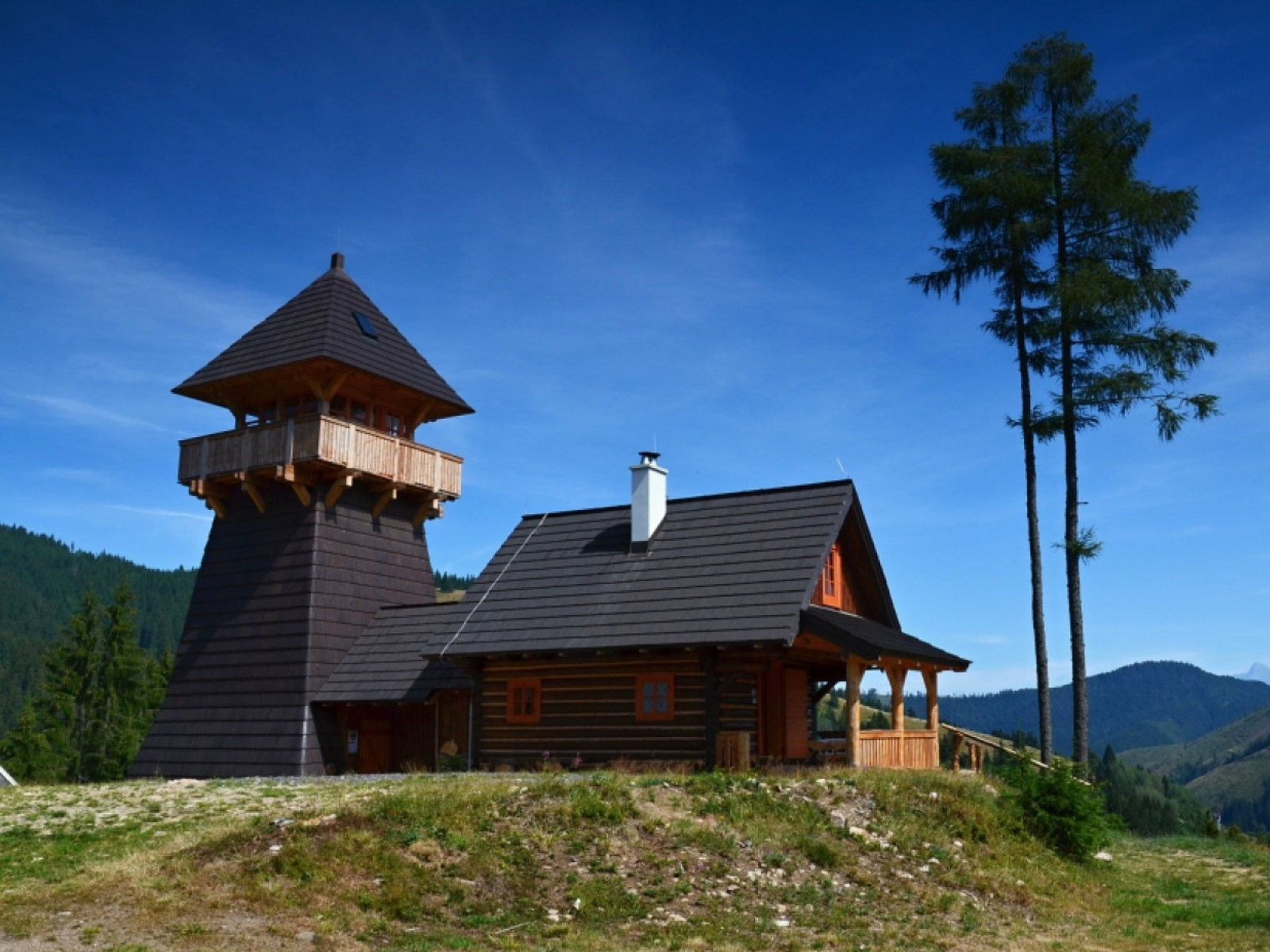 HIDDEN GEMS OF THE LOW TATRAS

In addition to many opportunities to discover natural beauty and hiking trails, the Low Tatras National Park also offers places that offer a cultural or historically valuable experience. Horehronie, Liptov and the surroundings of Čertovica are interspersed with mining tunnels, caves and tourist attractions, which are sensitively set in the environment and are worth discovering. Every day spent in the region can be unique and full of experiences.

The cave is located 20km from Chata pod sedlom Čertovica in the village Bystrá, at a short distance from Brezno, just before Mýto pod Ďumbierom. It is the most important cave in the Horehronie valley. Cavers first entered it in 1926, but it was not opened to the public until 1968. The cave is 3,531m long, but the public can see only 545 metres. It is also suitable for immobile visitors, as there are only 20 easy-to-climb stairs. The entrance to the cave is located at an altitude of 565m only about 120m from the parking lot. It is characterized mainly by narrow and high corridors, however, you will also find beautiful halls with dripstone decoration, such as the Hall of Canopies or the Collapsed Dome. There is an abyss Hell, up to 56 metres deep, and you will be accompanied by several species of bats during the visit.
http://www.ssj.sk/en/jaskyna/3-bystrianska-cave 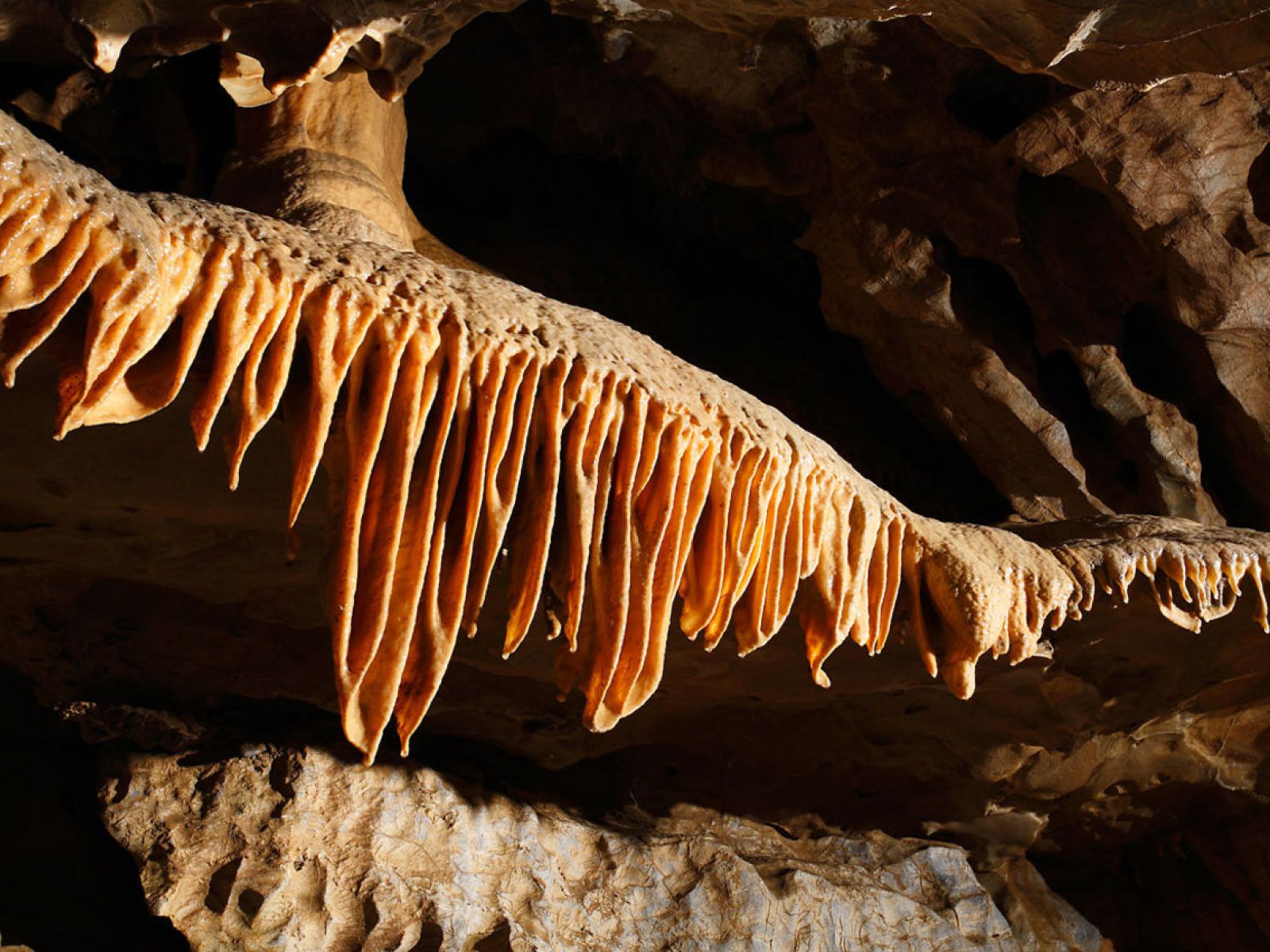 Enthusiasts from the Salvator civic association in the village of Vyšná Boca opened the gold mining tunnel to the public in 2018. It is only part of the former extensive system of mining tunnels, which had up to four floors and four independent entrances. In the 16th and 18th centuries the mine was worked by the mining company Salwatoris gold bergwerk under the administration of the Royal Mining Chamber. Gold, silver and copper were mined here. According to some sources, the local mines produced up to 60 kilograms of gold per year.
Read more ... 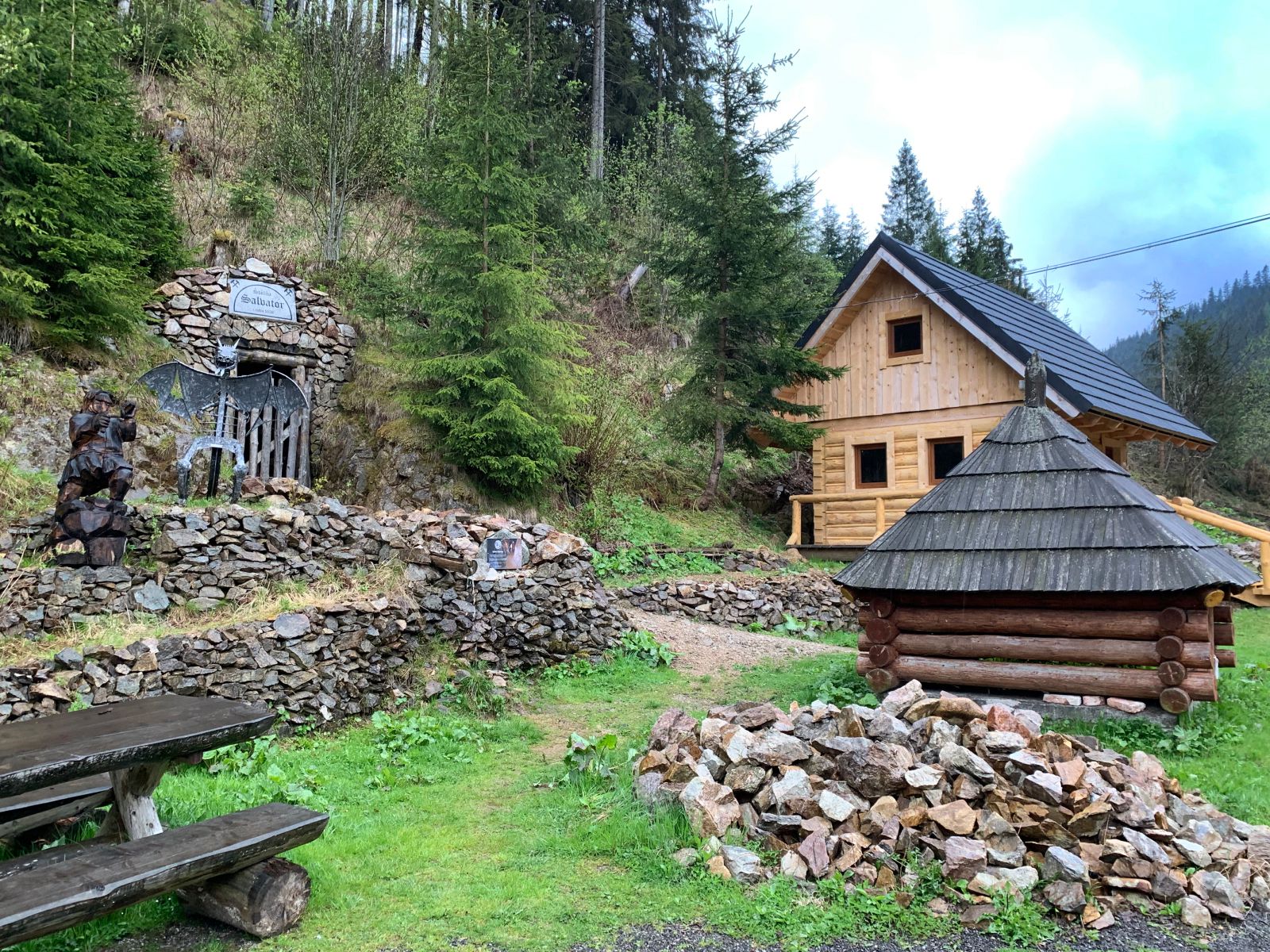 One of the members of the local association will guide you through the winding, low corridors with enthusiasm and provide you with passionate presentation. The guided tour of the tunnel lasts about 45 minutes and it is a way to make your trip around the area even more interesting. The entrance to the Salvator tunnel is protected by a wrought-iron statue of a dragon, which was donated and installed in front of the tunnel by the artistic blacksmith Peter Trvalec. From Chata pod sedlom Čertovica you can get directly to the entrance of the mine tunnel by car or on foot. It takes about 10 minutes by car, it is a pleasant half-hour walk down the hill.